Have you ever committed code that made you feel ashamed? Maybe, for instance, a print statement you used for debugging just because you were too lazy to use the debugger? Maybe you even had that crazy idea of using a not so pretty print message? (Don’t worry, we all felt desperate to that point.)

If the project you are working on has strong code review practices then, those print statements should get caught before going to production. Nevertheless, the code review process may let pass those pieces of code undetected when the diff set gets too large and there may be some time constraints.

One simple solution is to review your own code before committing. How? I’ve found out recently a very useful feature on git, the ‘git add -p’ command (if you use some git client I don’t know how to use this feature, but there’s probably an equivalent functionality). This command allows you to “interactively choose hunks of patch between the index and the work tree and add them to the index”1, giving you a chance to review the difference before adding modified contents to the index.

But who has the patience to review every chunk of code carefully? Well, maybe no one?

Commit 4 dummies is a side project I’ve developed to help me detecting junk code before committing it. It is based on another git feature that allows you to automate such code revision: Git Hooks. 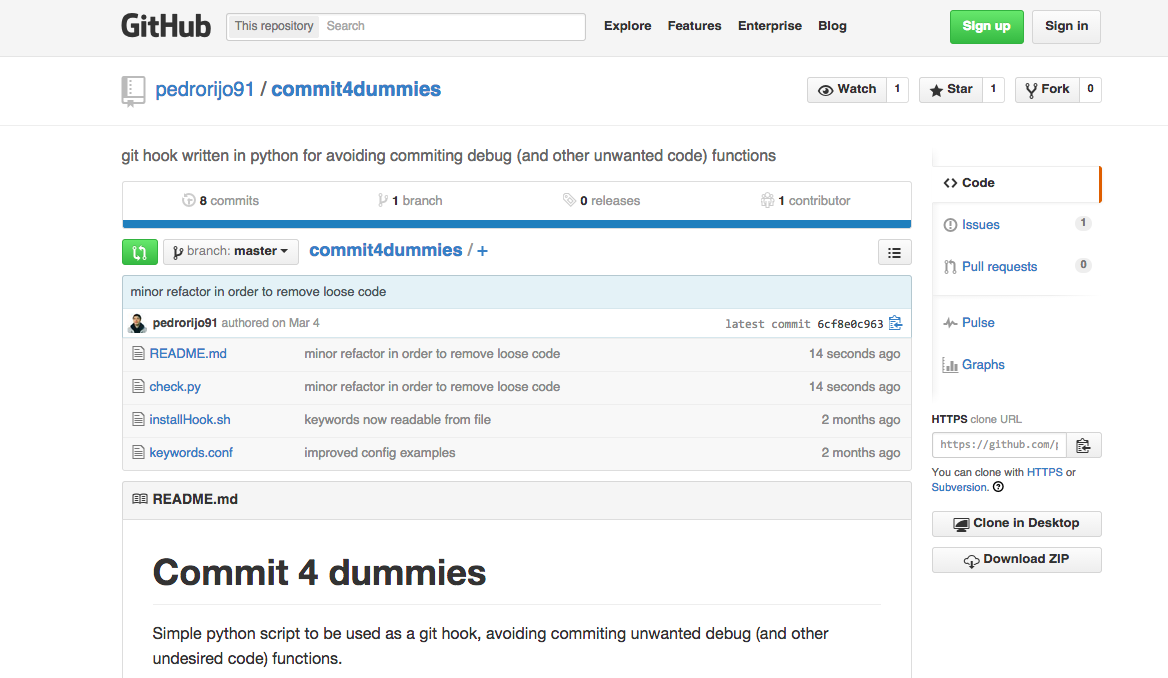 Git Hooks are custom scripts that run on specific events, and there are two groups:

In the documentation you can learn about the several client-side and server-side hooks. For the purpose of reviewing committing code we focus on ‘pre-commit’ hooks. As declared in the documentation, “The pre-commit hook is run first, before you even type in a commit message”, meaning it’s the perfect tool for our goal.

So, how is this hook implemented? The basic idea is to make a ‘grep’ search through the diff set for some words that should be defined in the ‘keywords.conf’ file. This file is a simple text file, containing, in each line, the file extension and the words to look for. Take a look in this simple example. This file allows anyone to configure the hook to its own needs without much effort.

Note: You can always skip you client-side hooks with ‘git commit –no-verify’