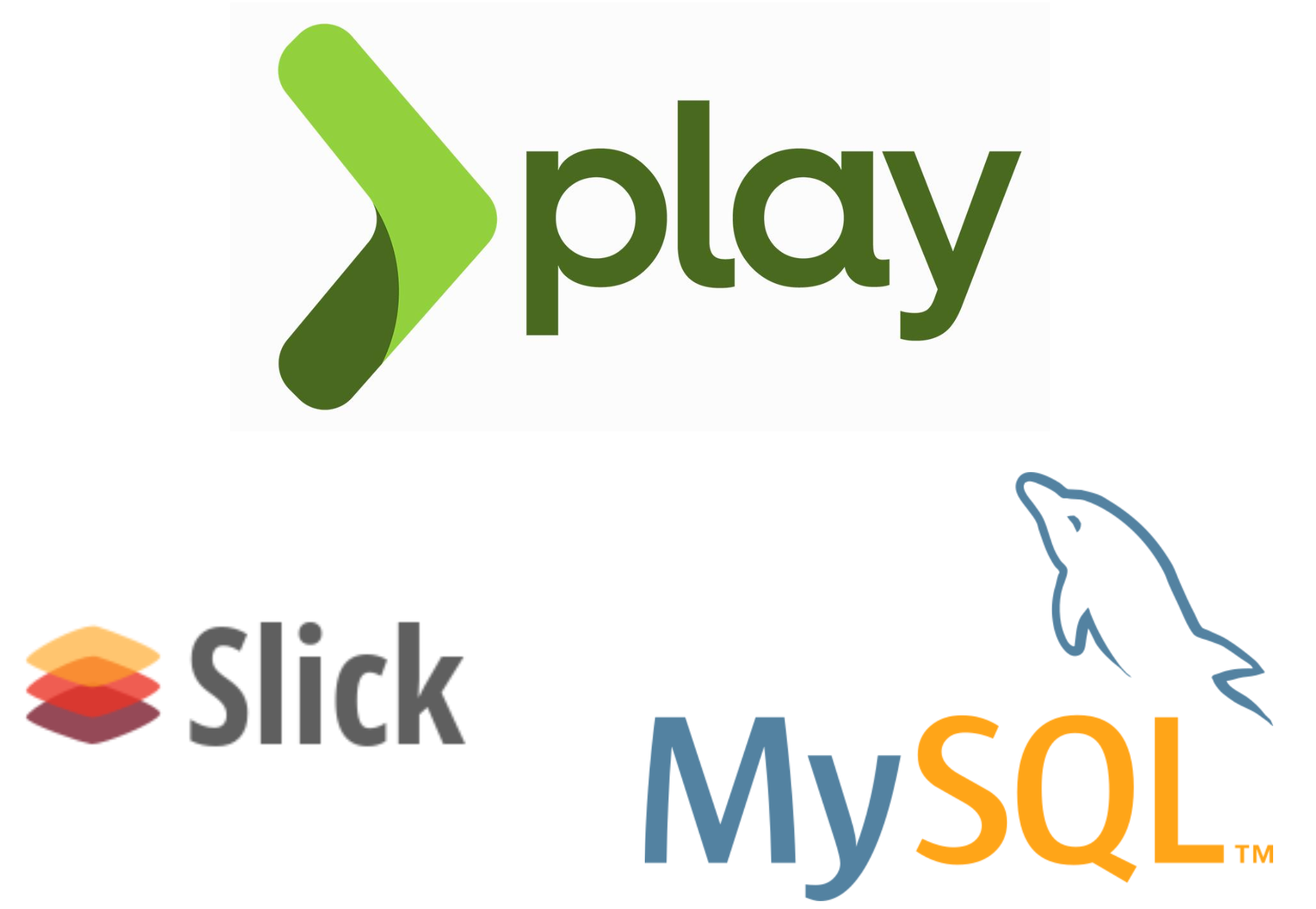 Edit: You may want to have a look at the updated example using Play 2.7 instead of Play 2.4 at Play Framework and Slick example updated

Building webapps in Scala is typically done using the Play framework. And for persistent storage, Scala developers typically appeal to Slick. Even though it is possible to use Java libraries and frameworks like the well-know Hibernate - described as an high-performance Object/Relational persistence and query service - Slick has a Scala-like API, where everything is pretty similar to Scala collections, making Slick way more attractive to Scala developers.

Another difference that should be kept in mind, is that Slick is not an ORM like Hibernate. Slick is more like a functional-relational mapper. And a more detailed difference between Slick and ORMs is available in the Slick documentation. Slick also allows the use of multiple backends, meaning that you can use a lot of different databases with slick (H2, MySQL, PostgreSQL, and many others).

As stated in Slick docs:

Slick is a modern database query and access library for Scala. It allows you to work with stored data almost as if you were using Scala collections (…). You can write your database queries in Scala instead of SQL, thus profiting from the static checking, compile-time safety and compositionality of Scala.

When building a webapp in Scala with persistent storage you will probably think about using Play and Slick together. To achieve that you probably want to use Play Slick, a Play module that makes Slick a first-class citizen of Play. It consists of two features:

This module tries to provide an easy way to integrate Play and Slick, but while I was looking for some minimal example I noticed that there was missing some updated example which used Play 2.4 and Slick 3.1.0. Here are the closest examples I’ve found:

That said, I decided to compile the available examples and tutorials in the most simple and comprehensive example I could, mostly based on the last example. This example uses MySQL database, but it should be straightforward to implement it using other database.

Creating a Play app with Slick from scratch

First, there are some required software you need to have available at your machine:

After installing everything you need, make sure you have MySQL server running, and a database named playScalaSlickExample (you may chose another name, it will be described how to change later).

Now it’s time to start creating our app. The simplest way to do it is to run:

specifying your application name by replacing application-name by the desired name. If you opted by not installing activator you can create a sbt project manually, adding the dependencies and the correct folder structure.

At this moment you should have your base template, something like this

The next step is to add all the logic and models without using a database. We’ll make it using a variable representing the sequence of users (please, never use variables in Scala again). To do that, we’ll need to:

Besides the User, we’ll need a case class for the form submitted data (UserFormData), an object to deal with form submission (UserForm), and a object to answer queries (Users).

Besides that, we’ll create a service layer. This is not strictly necessary, but it’s a good practice to have a service layer that’s responsible to get and manipulate the information the controller needs. In our case it is so simple that we’ll omit it, but you can check it on Github.

Now it’s time to add the endpoints to which the application will respond.

Besides the controller you’ll also need to configure the routes file:

3. And don’t forget about the views

Finally, we’ll need to create the view to our application. The view will display a user creation form, and the existent users list.

Once again, you can check it out on Github.

At this moment you should have something similar to this code

This was the first part. Now it’s time to configure the database for our application. Let’s go through each step:

Also, if you have a jdbc dependency declared in your build.sbt file, remove it, or it will cause some errors in the compilation.

We need to specify how will the play application connect to the database. The following lines specify the database driver, in this case MySQL, the database and its user/password. Whatever the name you choose to the database (if you prefer other name to playScalaSlickExample), make sure it exists before starting the application.

2. Integrate our models with slick

Now it’s time to convert our models to slick objects, i.e. provide information for slick to map between classes and tables.

In our case, we want to map the User class/instances. Our case class will suffer no changes, but we need to create another class that tells slick how to map. I like to name those classes something like XTableDef, where X is the name of the model (case) class, but you can give them different names.

Note that the O.PrimaryKey and O.AutoInc constants indicate Slick that the id column is the primary key, and it should be incremented by the database itself.

Now we also need to adapt our Users object, that was used to make the queries.

To get the database object we can write

We’ll also need to create a table query. This table query object will map to the table, meaning all queries are done through this object

Now we’ll rewrite the methods to use the database instead of the in-memory sequence holding all users. This will change the methods signature, leading to changes in the service and possibly controllers.

Database evolutions allow you to declare migrations when you add new tables, modify them, or delete some. Since the database should be empty for now, evolutions will take care of adding the User table.

Play evolutions include a Ups and a Downs sections. The Downs section can be applied if Play thinks something went wrong and needs to rollback. You can disable this feature - may be danger to have downs in production - in the configurations with

The evolution scripts should be in the directory conf/evolutions/%databaseName% with the name of the scripts stating at 1.sql, incrementing at each evolution. Play keeps track of which evolutions has already applied in a table called play_evolutions.

Now everything should be up and running ! Also, the final version is available at Github in case you want to check something.

Try it out at localhost:9000, add more persistent data, and your own slick queries, and start creating your own applications.