On the other day I saw a post asking for usual questions on Scala related job interviews. Among some answers I saw a reference to a GitHub repository with several questions, not only Scala specific, but also about functional programming, and even more generic questions.

Here’s the list of questions I decided to answer to exercise myself, mostly from that repository:

), try to answer them yourself.

1. What is the difference between a var, a val and def?

A var is a variable. It’s a mutable reference to a value. Since it’s mutable, its value may change through the program lifetime. Keep in mind that the variable type cannot change in Scala. You may say that a var behaves similarly to Java variables.

A val is a value. It’s an immutable reference, meaning that its value never changes. Once assigned it will always keep the same value. It’s similar to constants in another languages.

A def creates a method (and a method is different from a function - thanks to AP for his comment). It is evaluated on call.

Bonus: what’s a lazy val? It’s almost like a val, but its value is only computed when needed. It’s specially useful to avoid heavy computations (using short-circuit for instance).

2. What is the difference between a trait and an abstract class?

The first difference is that a class can only extend one other class, but an unlimited number of traits.

While traits only support type parameters, abstract classes can have constructor parameters.

3. What is the difference between an object and a class?

An object is a singleton instance of a class. It does not need to be instantiated by the developer.

If an object has the same name that a class, the object is called a companion object (check Q7 for more details).

Case classes contain a companion object which holds the apply method. This fact makes possible to instantiate a case class without the new keyword. They also come with some helper methods like the .copy method, that eases the creation of a slightly changed copy from the original.

Case classes are specially useful to be used as DTOs.

5. What is the difference between a Java future and a Scala future?

This one I had to google a little about it. I have never used Java futures, so it was impossible for me to answer.

Obviously, I was not the first to search for the differences between both futures. I found a really clean and simple answer on StackOverflow which highlights the fact that the Scala implementation is in fact asynchronous without blocking, while in Java you can’t get the future value without blocking.

Scala provides an API to manipulate the future as a monad or by attaching callbacks for completion. Unless you decide to use the Await, you won’t block your program using Scala futures.

6. What is the difference between unapply and apply, when would you use them?

unapply is a method that needs to be implemented by an object in order for it to be an extractor. Extractors are used in pattern matching to access an object constructor parameters. It’s the opposite of a constructor.

7. What is a companion object?

Note that the companion object has to be defined in the same source file that the class.

8. What is the difference between the following terms and types in Scala: Nil, Null, None, Nothing?

The None is the empty representation of the Option monad (see answer #11).

Null is a Scala trait, where null is its only instance. The null value comes from Java and it’s an instance of any object, i.e., it is a subtype of all reference types, but not of value types. It exists so that reference types can be assigned null and value types (like Int or Long) can’t.

Nothing is another Scala trait. It’s a subtype of any other type, and it has no subtypes. It exists due to the complex type system Scala has. It has zero instances. It’s the return type of a method that never returns normally, for instance, a method that always throws an exception. The reason Scala has a bottom type is tied to its ability to express variance in type parameters..

Finally, Nil represents an empty List of anything of size zero. Nil is of type List[Nothing].

All these types can create a sense of emptiness right? Here’s a little help understanding emptiness in Scala. 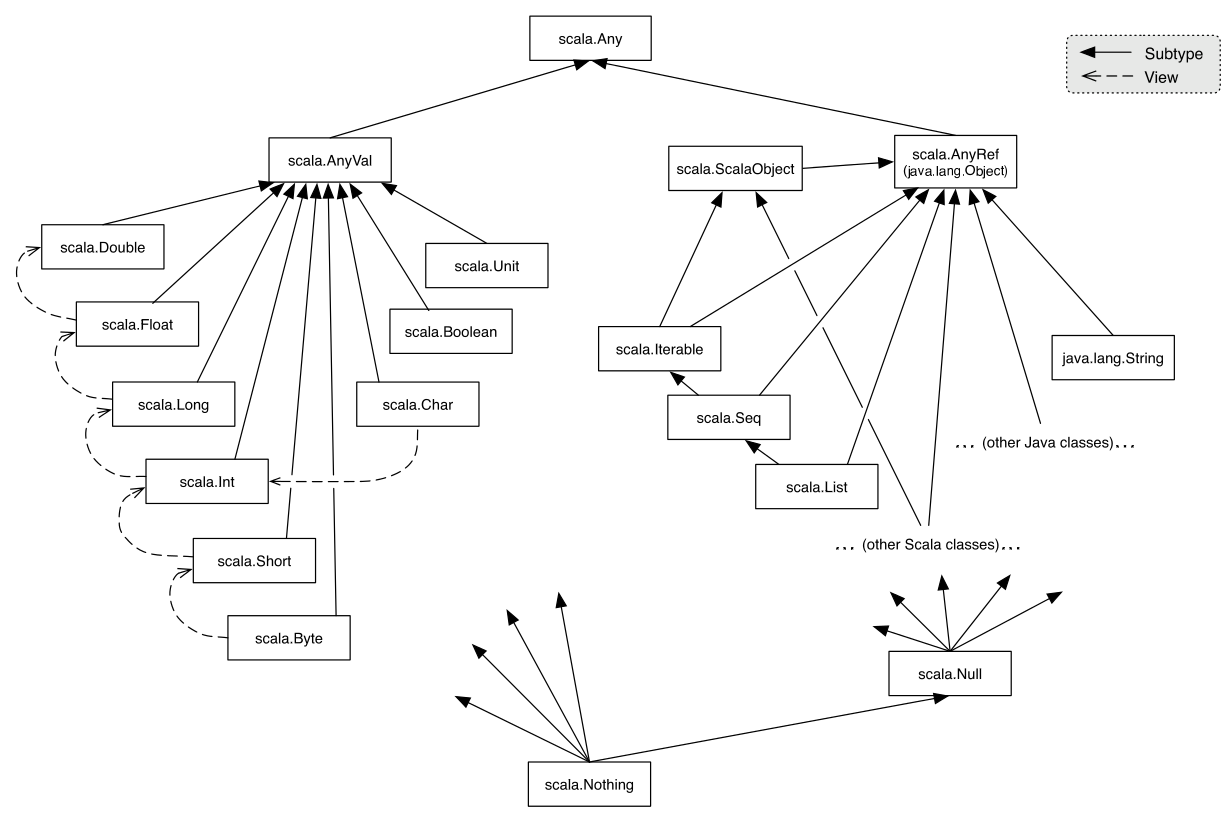 Unit is a type which represents the absence of value, just like Java void. It is a subtype of scala.AnyVal. There is only one value of type Unit, represented by (), and it is not represented by any object in the underlying runtime system.

10. What is the difference between a call-by-value and call-by-name parameter?

The difference between a call-by-value and a call-by-name parameter, is that the former is computed before calling the function, and the later is evaluated when accessed.

Example: If we declare the following functions

and now call them:

As it may be seen, the call-by-name example makes the computation only when needed, and every time it is called, while the call-by-value only computes once, but it computes before invoking the function (callByName).

11. Define uses for the Option monad and good practices it provides.

The Option monad is the Scala solution to the null problem from Java. While in Java the absence of a value is modeled through the null value, in Scala its usage is discouraged, in flavor of the Option.

Using null values one might try to call a method on a null instance, because the developer was not expecting that there could be no value, and get a NullPointerException. Using the Option, the developer always knows in which cases it may have to deal with the absence of value.

yield generates a value to be kept in each iteration of a loop. yield is used in for comprehensions as to provide a syntactic alternative to the combined usage of map/flatMap and filter operations on monads (see answer #14).

Implicit parameters can lead to unexpected behavior if one is not aware of the precedence when looking up.

So, what’s the order the compiler will look up for implicits?

A nice set of examples can be found here.

14. What operations is a for comprehension syntactic sugar for?

A for comprehension is a alternative syntax for the composition of several operations on monads.

A for comprehension can be replaced by foreach operations (if no yield keyword is being used), or by map/flatMap and filter (actually, while confirming my words I found out about the withFilter method).

While Scala Streams can be really useful due to its lazy nature, it may also come with some unexpected problems.

The biggest problem is that Scala Streams can be infinite, but your memory isn’t. If used wrongly, streams can lead to memory consumption problems. One must be cautious when saving references to a stream. One common guideline, is not to assign a stream (head) to a val, but instead, make it a def.

This is a consequence of the technique behind streams: memoization

Have you ever had one of those nasty bugs where you were using an integer thinking it would represent something but it actually represented a totally different thing ? For instance, an integer representing an age, and another representing an height getting mixed (180 years old and 25 centimetres tall do look weird no?).

Because of that, it’s considered a good practice to wrap primitive types into more meaningful types.

Value classes allow a developer to increase the program type safety without incurring into penalties from allocating runtime objects.

There are some constraints and limitations, but the basic idea is that at compile time the object allocation is removed, by replacing the value classes instance by primitive types. More details can be found on its SIP.

17. Option vs Try vs Either

All of these 3 monads allow us to represent a computation that did not executed as expected.

An Option, as explained on answer #11, represents the absence of value. It can be used when searching for something. For instance, database accesses often return Option in lookup queries.

Try is the monad approach to the Java try/catch block. It wraps runtime exceptions.

If you need to provide a little more info about the reason the computation has failed, Either may be very useful. With Either you specify two possible return types: the expected/correct/successful and the error case which can be as simple as a String message to be displayed to the user, or a full ADT.

18. What is function currying?

Currying is a technique of making a function that takes multiple arguments into a series of functions that take a part of the arguments.

Currying is useful in many different contexts, but most often when you have to deal with Higher order functions.

19. What is Tail recursion?

In “normal” recursive methods, a method calls itself at some point. This technique is used in the naive implementation of the Fibonacci number, for instance. The problem with this approach is that at each recursive step, another chunk of information needs to be saved on the stack. In some cases, an huge number of recursive steps can occur, leading to stack overflow errors.

if we now run both versions, what would happen?

20. What are High Order Functions?

This was a fun and valuable exercise, both to deep my knowledge on some topics, and to learn about other topics I never had contact with until now, like the Java futures.

The answers I provide may offer some discussion points, but the goal was to provide a line of thought on those topics. There’s a lot more that can be said on each topic, depending on whom is asking them. Typical interviewers may ask you to go deeper on some of the topic to better understand your knowledge of the subject, or may ask you to relate two or more of the subjects.

If you are preparing yourself to an interview, make sure you are comfortable in those topics, and don’t simply memorize answers.